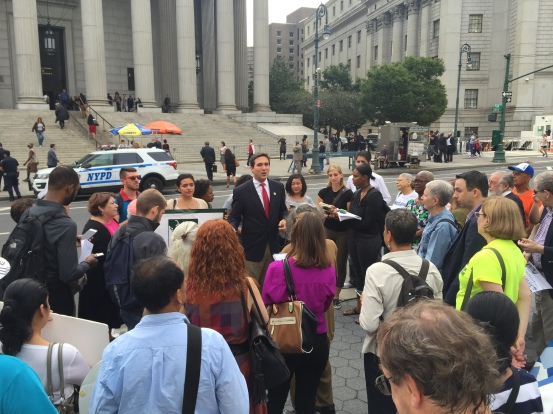 Tenants, housing advocates and allies convened today to file an intervention at the New York County Courthouse against the landlord group, Rent Stabilizing Association over their lawsuit looking to cancel the rent freeze on rent-stabilized apartments.

On June 27, 2016 the Rent Guidelines Board (RGB) made a historic decision to extend the already historic rent freeze for another year. In response, the Rent Stabilization Association (RSA), which represents about 25,000 city landlords, filed a lawsuit to cancel the rent freeze, claiming the RGB inappropriately considered tenant affordability in issuing its rent order. Parties are intervening to uphold RGB’s decision under Rent Stabilization Law’s mandate that the board consider data regarding the cost of living and any other relevant information. Parties are represented by attorneys from the Urban Justice Center, Goddard Riverside Law Project and Legal Aid Society and include Progressive Caucus members Council Members Antonio Reynoso, Donovan Richards, Helen Rosenthal, Ben Kallos, Jumaane D. Williams, Mark Levine, Margaret Chin, Stephen Levin and Julissa Ferreras-Copeland.  Full Release

“Until building owners open their books, the need for rent increases is questionable. I am proud to stand with the Rent Justice Coalition as a party to this lawsuit,” said Council Member Helen Rosenthal.

“We cannot support an attack that seeks to raise rents for over a million New Yorkers,” said Council Member Stephen Levin. “During a time when the cost of living is at an all-time high, tenants deserve every bit of respite they can get. Residents are frequently subject to harassment and intimidation, and few have the resources to defend their rights in court.”

“Keeping rents low for working families has given them the opportunity to enter the middle class while creating vibrant communities throughout the City” said Councilman I. Daneek Miller. “While the RSA claims their members cannot afford this freeze, for the last 10 years expenses outpaced utility costs for their properties, and in 2014, their income increased by 3.5 percent. At the same time, most of their tenants contributed more than a third of their income to pay their rent. The RSA’s lawsuit is fundamentally flawed and I am pleased to be working with my colleagues to stand up for these residents.”

“After careful deliberation of testimony from tenants, building owners and elected officials, the Rent Guidelines Board voted this year to freeze rents for one-year lease renewals. This baseless lawsuit by the misleadingly-named Rent Stabilization Association is an attempt to negate a public process by which tenants are finally receiving the equal consideration they deserve,” said Council Member Margaret Chin. “I am proud to join my colleagues in the Progressive Caucus, other elected officials and tenant advocates to defend against this attempt to overturn the RGB’s core function – one that it has employed dutifully for the past 47 years.”

“New York tenants know all too well what it means to be squeezed,” said Council Member Ydanis Rodriguez. “While we can’t do anything to provide more space in their apartments, we can continue to ease pressure on their pocket books with rent freezes for rent regulated apartments. The affordability crunch in our city is serious and protecting our longtime residents from the displacement it causes is paramount to having the healthy, vibrant city we all love.”