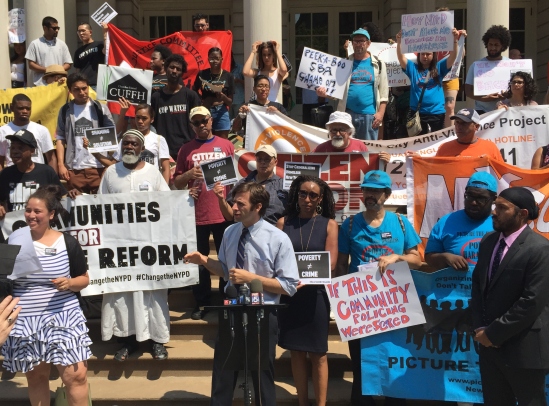 Members of the City Council Progressive Caucus are outraged and disappointed at the recent correspondence by Sgt. Ed Mullins, President of the NYPD Sergeants Benevolent Association, encouraging the union’s members to publicize images of some of our most vulnerable New Yorkers. In the letter, Mullins ask for email submissions of “homeless lying in our streets, aggressive panhandlers, people urinating in public or engaging in open-air drug activity, and quality of life offenses of every type.” Full Release

“Our moral compass is deteriorating when individuals tasked with leading our city choose to humiliate, rather than support, victims of larger social and economic problems. The SBA would rather focus on the surface and not analyze the roots that include a lagging recovery, shrinking wages and federal divestment in our communities,” said Co-Chair, Council Member Antonio Reynoso. “We believe that all New Yorkers deserve courtesy, professionalism, and respect – that’s why we are supporting the Right to Know Act, which empowers those who the police stop without a legal reason to be informed of who is stopping them, why they are being stopped, and to provide consent to be searched. As a Caucus we aim for improved community/police relations, not the toxic environment created by this SBA stunt.”

“The SBA should be leading the city from a position of strength, not belittling the weak and vulnerable,” said Co-Chair, Council Member Donovan Richards. “The city’s homeless population is the largest we’ve ever seen and that is the result of many years of policies that neglected wage increases, affordable housing and mental health services. Demonizing New Yorkers who resort to living on the streets is disheartening and completely ignores the root of the problem, which will not be solved by these dehumanizing efforts.”

“This request is a deeply troubling and wrongheaded way to approach homelessness in our city. Rather than singling out and stigmatizing individuals who need our compassion we should focus on ensuring that city services meant to help them are accessible, properly funded and responsive to their needs. What we need to effectively combat homelessness is a robust NY/NY IV agreement that must guarantee the construction of 30,000 new units of supportive housing in New York City over the next ten years,” said Council Member Stephen Levin, Chair of the Committee on General Welfare.

“It is appalling but not surprising that Sgt. Ed Mullins would issue such a discriminatory and unreasonable directive to members of his union. Harassment is not an effective tool against any public health crisis, and it will certainly not solve homelessness in New York City. These comments show Sgt. Mullins’ glaring ignorance of the purpose and scope of the NYPD, which is to serve and protect the citizens of New York City, regardless of their income or station, and are not the type of comments that come from a true leader. Homelessness isn’t an illegal act, but it’s clear that the Sgt. Mullins is only interested in irresponsible publicity stunts that fuel poor police-community relations. Members of the City Council are working in close consultation with the Mayor to combat homelessness by proactive, compassionate, and effective means, and we once again invite Sgt. Mullins to the adults table,” said, Council Member Jumaane D. Williams, Deputy Leader and Chair of the Committee on Housing and Buildings.

“The Sergeants Benevolent Association’s letter encouraging its members to photograph the homeless and post the photos online is a disturbing and heartless act against the City’s most vulnerable. Being homeless is not a crime, and the increasingly visible homeless population is a result of failed housing and mental health policies that predate this administration. I encourage SBA President Ed Mullins to recognize that the homeless are some of the citizens he and his members are sworn to protect,” said Vice-Chair, Council Member Helen Rosenthal.

“By urging its members to post pictures of the homeless online, the leadership of the Sergeants Benevolent Association is further marginalizing an already vulnerable population in order to scare New Yorkers and to further their own political agenda,” said Council Member Margaret Chin. “I join my Council colleagues who are working to find a solution to the difficult problem of homelessness, and reject any attempt to shame and denigrate those who deserve our compassion – and desperately need our help.”

“The SBA–and its membership–has the important responsibility of carrying out their duties with respect and compassion; in this latest action, they’ve failed to express either of those traits. The homeless population in our City cannot be a source of humor, humiliation, or anger–they must inspire us to be evaluative about a system that allows even one person to live on our streets. We have a lot of work to do to reverse a difficult and disheartening trend–but we are ready to do that by shifting policy to protect tenants in their homes, create bridge programs to education and jobs, and to connect the most vulnerable to health and mental health services. I join my colleagues in asking the SBA–and our police officers–to be better than this,” said Council Member Carlos Menchaca.

“The actions taken by the SBA not only highlight an issue the city is working diligently to resolve, but rob some New Yorkers of their right to privacy and in some cases humanity. Groups and actions like these are exactly the type of things that make Americans so frustrated and disinterested in the political process. We need to bring the level of conversation above the belt, we owe that to New Yorkers,” said Council Member Ydanis Rodriguez.

“It’s embarrassing and morally backwards to think that those most in charge of caring for the well-being of our city would spend time shaming our most vulnerable citizens rather than helping them,” said Council Member Brad Lander. “It’s time the SBA stops focusing on humiliating New Yorkers in need, and starts working together to improve the systemic causes of inequality that continue to cause these problems. For anyone who’d like to use their cell phones for a good cause without embarrassing those in need, try calling your council member’s office, Tweeting about legislation you support, and of course there’s no shortage of plastic bags stuck in trees that you can submit to the #BagItNYC map…”

“Instead of constructively working to solve the problems associated with homelessness or to address its root causes, this campaign de-humanizes our fellow New Yorkers,” said Council Member Corey Johnson. “All parties who are interested in improving the quality of life in New York City need to come together and work towards this common goal. A campaign to humiliate the homeless is antithetical to New York City values.”

“Public shaming of the most vulnerable New Yorkers may raise the profile of those compiling the images, but it does little to help those in need. We don’t need public photo albums online to know that many of our constituents still suffer from poverty, mental illness, homelessness and other ills. True leadership demands solutions, and my Council colleagues and I will continue to focus on solutions so that our city remains one that we can be proud of — clean, safe and providing opportunity to all,” said Council Member Debi Rose.

“The solution to homelessness in New York City isn’t posting pictures. It’s creating supportive housing, which has been proven to keep the mentally ill in safe environments, off the streets, and out of the shelter system,” said Council Member Mark Levine.