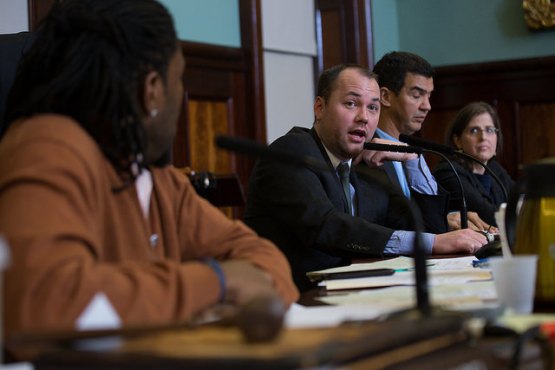 Council Member Jumaane D. Williams, Deputy Leader and Chair of the Council’s Housing and Buildings Committee and Council Member Helen Rosenthal, Chair of the Council’s Contracts Committee, joined their progressive colleagues to applaud the allocation of nearly double the amount of funding to target illegal conversions of residential units to hotel rooms, known as illegal hotels, in the Fiscal Year 2016 Budget for the City of New York.

Working with Mayor Bill de Blasio, the City Council allocated an additional $1.2 million to fund 17 additional staff members to the Office of Special Enforcement (OSE), the agency that responds to 311 complaints of illegal hotel activity. Residential apartments used as hotel rooms can no longer be homes for New Yorkers. According to a 2014 report by the Office of Attorney General Eric Schneiderman, there were 16,483 individual illegal hotel units in New York City in 2014 alone, and 72% of the City’s Airbnb listings are illegal. Full Release

“New York City is in a housing crisis exacerbated by home-sharing websites like Airbnb that account for more than 16,000 illegal rentals in the five boroughs. This is a fundamental problem not just in New York City but across the country that has skyrocketed in recent years. As Chair of the Council’s Housing and Buildings Committee, I firmly believe that the Mayor’s Office of Special Enforcement should be expanded and increased so we can better combat bad acting landlords from taking affordable units off the market, so I am proud this was included in our FY16 Budget. By beefing up the OSE, we will ultimately ensure the Mayor’s Housing Plan does not fall short of its 200,000 unit goal and that New York City remains affordable for all,” said Council Member Jumaane D. Williams.

“New York City has a shortage of available housing, and every apartment used as a hotel room cannot be a home to a New Yorker. I am proud to join Housing and Buildings Committee Chair Jumaane Williams in announcing that the City will nearly double funding this year to pursue bad actors who use homes as hotel rooms,” said Council Member Helen Rosenthal.

“More funding for OSE provides more opportunity for a coordinated effort to crack down on illegal hotel operators, especially those that operate multiple units. These companies and property managers are breaking the law, displacing residents, and contributing to the affordable housing crisis all across the city. I want to thank Mayor de Blasio and Speaker Mark Viverito for responding proactively to address this growing problem,” said Council Member Antonio Reynoso, Caucus Co-Chair.

“Thanks to the leadership of the NYC Council, the Office of Special Enforcement has teeth again. With the additional $1.2 million for 17 additional staff our city will be able to have a more proportional response to some of the major issues facing our housing market like illegal rentals on sites like AirBnB. However, this is just the beginning of our city’s response to these worrying trends. Together with Council member Rosenthal I introduced legislation to increase the penalties and transparency of illegally operating hotels so that our city can take the best steps forward in retaining our affordable housing and fighting these illegal operators,” said Council Member Ydanis Rodriguez.

“The expansion of the Office of Special Enforcement is a strong step to crackdown on illegal commercial hotel operators. Bad actors who take affordable units off the market will continue to disregard the law unless they know that they will be held accountable. I’m proud to be part of a citywide coalition of legislators and activists who are committed to fighting back and ensuring our laws are enforced,” said Council Member Mark Levine, Co-Chair of City Council Affordable Housing Preservation Taskforce.

“Illegal hotels eat into our affordable housing stock and hurt our communities. I was proud to join Council Members Rosenthal and Williams in the fight to raise the Office of Special Enforcement’s budget to reflect the rising scourge of illegal hotels,” said Council Member Ben Kallos.