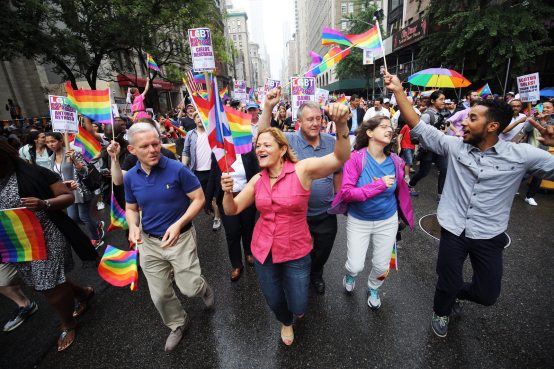 Council Members expressed support of the United States Supreme Court 5-to-4 ruling in Obergefell et al. v. Hodges, Director, Ohio Department of Health, et al. This historic decision extends the constitutional right to marry to same-sex couples in all 50 states of the Union.

“As we celebrate this momentous decision, we must remind ourselves that the struggle for LGBTQ justice is not over. There are too many LGBTQ people suffering from unjust and pervasive discrimination all over the world and we will not rest until those injustices are made right.  New York has been proud to lead the fight for equal rights for the LGBTQ community. From Stonewall to the Marriage Equality Act of 2011, New York has been helped lead the way,” Council Speaker Melissa Mark-Viverito. “We will continue to fight to ensure our LGBTQ community has the same rights as everyone. This means we must pass the Gender Expression Non-Discrimination Act in New York State and a comprehensive LGBTQ civil rights law in Washington – because discrimination and bigotry are never the answer.

“‎The Supreme Court’s ruling today on marriage equality reassures the founding principles of this great nation,” said Council Member Donovan Richards, Co-Chair of New York City Council’s Progressive Caucus. “When two people love each, they will no longer have to worry about expressing that love to each other, and what better way to express it than through marriage. Life, liberty and the pursuit of happiness has been guaranteed to millions of Americans and we can all be proud of our democracy this morning”

“We have been moved to tears this morning, knowing that the pain and stigma of being unequal is lifted. Of knowing that our relationship and our love is recognized by our country and is just as valid, beautiful and equal as any other,” said Majority Leader and openly gay Council Member Jimmy Van Bramer. “This ruling doesn’t just benefit me and [my husband] Dan or even just gay and lesbian couples and the LGBT community. The truth is that when our nation takes a stand against injustice, we are all uplifted.”

“As we celebrate the fourth anniversary of marriage equality in New York State, we see that marriage equality, rather than bringing on the end of the world, has done just the opposite – LGBTQ citizens pay taxes, perform military service and participate in American society in every way, and now have as much right to marry as any other consenting adult in this country, which is as it should be,” said Council Member Debi Rose.

“The U.S. Supreme Court has affirmed what Meg and I – and the overwhelming majority of residents of our community – have long believed: that love is love, and that every state must recognize marriage of LGBTQ Americans equally with straight ones,” said Council Member Brad Lander. “The idea of America as a place where future generations can advance freedom and equality further is a powerful one. We are thrilled for our friends in the 30 states around the U.S. whose love and families are now equal in the eyes of the law, glad that New York is already there, and proud of our country. We have so far to go, but today we have indeed, as President Obama noted, made our union a little more perfect.”

“Marriage equality for all couples in our country was long overdue. With the Supreme Court’s decision last week, our nation took an historic step toward equal rights for all Americans. I salute the dedication and sacrifice of the LGBT community that has worked and waited so long to see this barrier broken down.” said Council Member Stephen Levin.