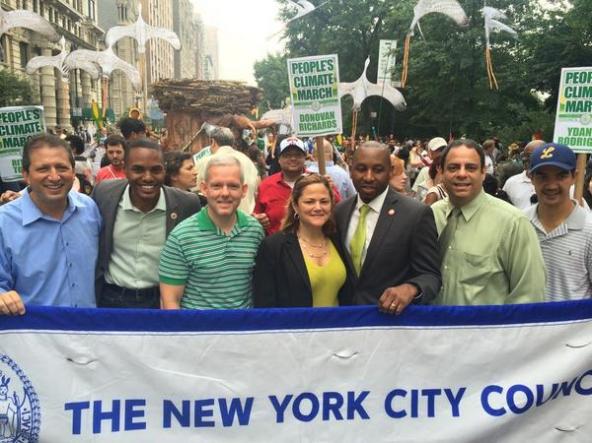 Members of Progressive Caucus praise Governor Andrew Cuomo’s  ban on  hydraulic fracturing in New York State on December 17th, 2014. This  decision was supported by environmentalist, including the 200+ member New Yorkers Against Fracking Coalition who for years have claimed that  fracking, or the process of   using sand, chemicals and water to extract oil and natural gas from reservoirs beneath the surface, negatively impacts neighboring  ecosystems and natural resources. The ban was determined after the New York State Department of Health’s conducted a study to analyze and quantify  effects of hydraulic fracturing. Ultimately, research proved that the  benefits of tapping into the natural gas deposits do not outweigh the uncertainties and risks to public and environmental health.

Mayor Bill de Blasion responded: “I became convinced a few years ago that this is something we have to entirely rethink, and I think that what the governor has done is the right move for New York State.”

“As Chair to New York City Council’s Committee on Environmental Protection, I am thrilled Governor Cuomo announced New York State will ban fracking. Today’s announcement is a major win for the future of New York. After years of uncertainty, environmental advocates and everyday New Yorkers alike can now be assured that our water, natural resources and—most importantly—our health will not be compromised by the rash speculation of the fracking industry. I want to thank Governor Cuomo and his administration for making this important and timely decision.” said Caucus Co- Chair, Council Member Donovan Richards

“Our City, surrounding environment and New York City drinking water must be protected from the dangerous effects of fracking. Fracking has been shown to be toxic and damaging—but we still have not banned it in New York State. New York City stands in solidarity with small towns who have banned hydrofracking upstate in protecting our residents and surrounding lands from the immense dangers and unknowns of hydrofracking,” said Council Member Ben Kallos, Caucus Vice Chair for Policy.

“While it is highly unlikely that anyone would ‘frack’ within NYC, it’s important to make this gesture of solidarity— fracking should not be an acceptable practice in NYS: upstate or downstate,” said Council Member Helen Rosenthal, Caucus Vice Chair for Budget, “If the state-wide moratorium were to be revoked, fellow New Yorkers in cities, towns, and villages throughout our state would be thrust onto the front lines and forced to curb this devastating impact on the environment through local ordinances. Let this bill signal solidarity with those localities taking action to protect our land, our food, our water, our health and our future.”

“I strongly commend Governor Cuomo’s Administration for making the right call to not frack in New York state. The negative health consequences of fracking are well known and the Administration’s decision against it is sound science and sound policy. The Governor and his team sent a bold statement today that we must ensure the health and well-being of all New Yorkers,” said Council Speaker Melissa Mark-Viverito.

“Thanks to Governor Cuomo for his decision today to ban fracking in NY and protect our health and environment!” said Council Member Stephen Levin.

“I applaud the Governor’s decision to ban hydraulic fracturing in New York State. Too many communities’ water supplies have been ruined. Too many people have had their health negatively affected. As the first shale state to ban hydraulic fracturing our state is setting the tone for our nation. I am incredibly proud that our governor has stood up to special interests and made the right decision for our state’s future” said Council Member Ydanis Rodriquez