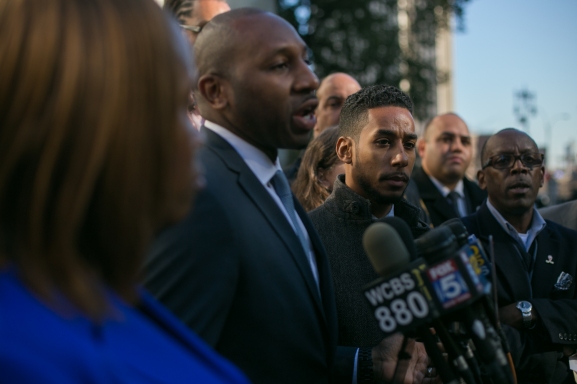 Council Members in the City Council Progressive Caucus contest the recent efforts by the Patrolmen’s Benevolent Association to illustrate an adversarial relationship between the Administration, Legislature and the essential, public servicemen in the NYPD. The false dichotomy illustrated by these sensational, publicity efforts is a danger to the collaboration and cohesion necessary at this critical moment. The PBA’s organized efforts to exclude elected officials, who have advocated on behalf of police officers, are detrimental to community unity and a failure of their leadership.

“It is deeply troubling that The New York City Patrolmen’s Benevolent Association issued a petition against Mayor De Blasio and City Council Speaker Mark-Viverito based on a perceived lack of support for officers from the administration, “ said Council Member Donovan Richards, Co-Chair of Progressive Caucus. “The police must partner with legislators to ensure that all New Yorkers are treated with respect in accordance to the law. If we fail to stand united on issues such as police accountability, it will become increasingly difficult to achieve the needed reforms in the system that justice demands.”

“In this trying time, the NYPD should be working even more closely with the administration to seek reforms that will improve its relationship with communities. The PBA’s efforts to undermine this are counterproductive, offensive, and do nothing to improve the NYPD’s relationship with New Yorkers,” said Caucus Co-Chair, Council Member Antonio Reynoso.

“The incendiary rhetoric of the PBA is inappropriate and completely not conducive to the goals our city is trying to reach. It only makes it harder for Mayor De Blasio, Commissioner Bratton, and Speaker Mark-Viverito to move our city forward and achieve true police reform. I expect more from a respected organization like the PBA, our police officers deserve better than these bombasts,” said Council Member Ydanis Rodriguez.

“I’m a strong supporter of our local officers and I have a deep appreciation for the members of the NYPD who sacrifice their safety for ours on a daily basis,” said Council Member Brad Lander. “ I know from personal experience working with the precincts in my district that the NYPD can keep our community safe while respecting the civil rights of all New Yorkers. I commend the leadership of Mayor Bill De Blasio and Speaker Melissa Mark-Viverito who have stood up for police officers and shown strong support for the NYPD on many occasions. The incendiary rhetoric coming from the Policemen’s Benevolent Association is only serving to divide and polarize the city at a time when what we need most is to heal.”

“This Administration and Council have clearly displayed a value for working people and, in particular, public employees, many of whom provide critical services to the residents of New York City,” said Council Member I. Daneek Miller, Chair of the Committee on Civil Service and Labor. “Any implication to the contrary would be disingenuous, at best.”

“I’m proud to have a strong relationship with the NYPD precinct leadership in my district, and I truly value the work NYPD officers do every day in our neighborhoods,” said Council Member Margaret Chin. “I also know that Mayor de Blasio and Council Speaker Mark-Viverito hold the same deep respect for NYPD officers, as they have shown throughout their careers in public service. We all want to bring real, positive change to community/police interactions throughout the city—and we’re going to do it by working together with community leaders and our partners in the NYPD. The recent negative tactics and rhetoric used by the Policemen’s Benevolent Association simply do nothing to help get us closer to a brighter future.”

“The rhetoric from the Patrolmen’s Benevolent Association has gone too far,” said New York City Council Majority Leader Jimmy Van Bramer. “The NYPD makes our City a better, more peaceful place. But this recent rhetorical shift from the PBA, demanding that Mayor de Blasio & Speaker Mark-Viverito be preemptively disinvited to the funerals of officers killed in the line of duty is over the top and unnecessary. We all want a safe and peaceful City. A return to civil discourse is necessary to advance our City to a better & safer place.”

“At this difficult moment in police-community relations, we must stand together so all people in all neighborhoods are treated with the same dignity and respect,” said Council Member Helen Rosenthal.

“What a day it will be when the PBA and other police unions decide to sit down as productive partners for police reform, instead of disseminating disrespectful and dangerous rhetoric that halts any progress being made. I call on the PBA to end their disgraceful tactics and come to the table like productive adults,” said Council Member Jumaane D. Williams.

“Now is the time to unite in our common pursuit of a safer and more just city, not to allow ourselves to be divided. We can and must move forward together, as New Yorkers, to tackle the challenges before us,” said Council Member Ben Kallos.

“At a time when we should be joining together to enact meaningful policing reforms, these types of stunts are in poor taste and extremely counterproductive. I’m confident these inflammatory sentiments are not held by a majority of the brave men and women on the force, and I hope the PBA will be more careful with its rhetoric in the future,” said Council Member Mark Levine.

“New York police officers are hard-working public servants. They keep us safe at great potential peril to their own well-being. Their courage warrants the presence of our highest elected officials – the Mayor and the Speaker – if one has given the ultimate sacrifice for the people of NYC,” said City Council Member Daniel Dromm. “They deserve leadership who will keep certain sacred traditions outside of political maneuvering. I am confident that cooler heads will prevail and members of the police force will respect that the office of Mayor and Speaker and honor the people’s elected officials. “