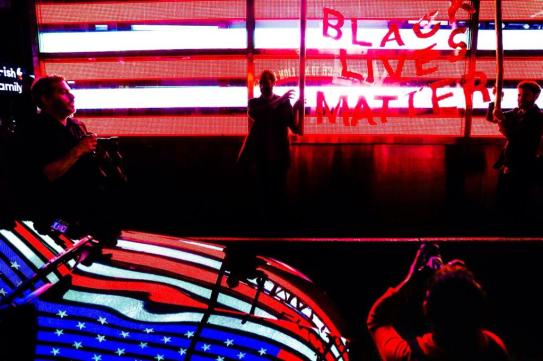 “Every year, hundreds of civilians lose their lives to excessive police force,” said Caucus Co-Chair Council Member Donovan Richards. “Despite the evidence detailing the pervasive use of tactics that prove fatal, successfully prosecuting police officers who kill in the line of duty is highly unusual. The tragic circumstances surrounding Mike Brown’s death, the grand jury’s misguided decision and the subsequent burning of Ferguson is a telling reminder that in America liberty and justice for all continues to be an elusive dream for those who are poorer and of color. As a nation we cannot afford to continue to miss opportunities to challenge and dismantle systems of governance, enforcement and law that skew in favor of one group over another.”

“It’s unfortunate that justice is not served equally. Quick, meaningful change is necessary to bring confidence back to a system that seems to oppress those disenfranchised communities it is meant to help the most. My heart goes out to the families of Mike Brown and victims throughout Ferguson,” said Co-Chair Antonio Reynoso.

“The heartbreaking decision by the grand jury in Ferguson, Missouri resonates with everyone who believes in equality and justice,” said Council Member Helen Rosenthal, Caucus Vice-Chair for Budget. “We still have a ways to go to ensure police accountability and the safety of the people the police are meant to protect. I commend the New Yorkers who led by example last night in a peaceful protest in Times Square.”

“‘We the people of the United States, in order to form a more perfect union, establish justice, insure domestic tranquility, … and secure the blessings of liberty to ourselves and our posterity’ did establish this great nation. And yet, ‘Injustice anywhere is a threat to justice everywhere,’ as Martin Luther King, Jr. once said.  Justice was not served in Ferguson,” said Council Member Ben Kallos an attorney and Caucus Vice-Chair for Policy. “I stand with my colleagues, the city, and the nation in decrying the decision in Ferguson.”

“I’m both saddened and angered by the lack of justice for Mike Brown and for too many other young men of color – including Eric Garner, Akai Gurley, and Tamir Rice, whose lives were taken when deadly force was not needed,” said Council Member Brad Lander. “Most officers work hard every day, with good intentions and without incident, risking their safety for ours. But when it’s consistently an African-American young man who is killed, when there is every reason to believe that deadly force is not necessary, when there’s so rarely accountability through the justice system, it is time for us to acknowledge the systemic impacts of race in how we police and do something about it. Here in NYC, we should use the remedial process coming out of the Floyd stop-and-frisk trial to address tensions between the NYPD and communities of color – including body-worn cameras, changing the tenor of most street interactions, and recommitting to community policing.”

“The grand jury decision regarding the shooting of an unarmed Michael Brown has left millions of Americans disgusted, angry, and wanting for justice,” said Council Member Stephen Levin. “My heart goes out to the family of Michael Brown and I join them in calling for peace in the wake of the grand jury’s decision last night. We must take every action to rid our nation of institutionalized discrimination and to a future where the color of your skin doesn’t determine your relationship with those who are meant to protect and serve us.”

“The events which have transpired in Ferguson bring to mind an old quote: ‘A system cannot fail those it was never meant to protect’,” said Council Member I. Daneek Miller, echoing a sentiment given by W.E.B. DuBois. “With this in mind, it is vital that we here in New York City continue to aspire towards a more just and understanding community. Together we can overcome the troubled dynamics which have plagued the relationship between law enforcement and communities of color.”

“Our thoughts and prayers are with the family of Michael Brown and the Ferguson community. We stand with the peaceful protesters calling for reform of the systemic issues plaguing our justice system,” said Council Member Ydanis Rodriguez.

“Michael Brown, Eric Garner, and Akai Gurley.  We must redouble our efforts to to make sure no other names are added to this terrible list by taking on the systemic problem of how young men of color are treated by law enforcement in America,” said Council Member Mark Levine.

“I stand in solidarity with Michael Brown’s family, and am deeply disappointed by Monday’s grand jury decision. From New York City to Ferguson, too many young men of color have been harmed due to discriminatory and excessive policing. I hope this occasion compels an open an honest dialogue about what can be done to curb police misconduct and to restore trust between law enforcement and communities of color,” said Council Member Ritchie Torres.

“The decision to not indict Officer Wilson in the fatal shooting of a young, unarmed man is disappointing, and a great injustice for Mike Brown, but also for the countless others who understand this as a dangerous precedent,” said Council Member Carlos Menchaca. “Our work to humanize the lives of people of color, and to transform police relations with our communities, is far from over. My prayers, thoughts, and solidarity continue to be with Mike’s family, and with the City of Ferguson.”

“After hearing the grand jury’s decision not to indict Wilson, I am ashamed and afraid of the world I am handing off to my son. But just as it is the responsibility of our police force to protect everyone, it is the responsibility of citizens to engage in lawful protest. We must be indignant against racism, poverty and lack of education, not people—that only perpetuates violence. As a nation, we must do better,” said Council Member Julissa Ferreras.

“First and foremost, my continued prayers for peace and comfort go to the family and friends of Michael Brown, as well as the parents of every child our nation has lost due to gun violence,” said Council Member Jumaane D. Williams, Co-Chair of the Council’s Taskforce to Combat Gun Violence. “As we learned about the grand jury’s decision, the results for most of us were not surprising, but disheartening nonetheless. It is my hope that elected officials in Missouri and across the country must advocate for a cultural-systemic shift within their police departments to reform the broken system that consistently targets men and women of more color. We all must sustain our unity and have our emotions fuel a relentless pursuit of reform. In 2014, it should not be this difficult, by virtually every single statistical metric, to be black in America.”

Founded in 2009, the Progressive Caucus has pioneered reform of criminal justice policies to emphasize prevention, alternatives-to-incarceration and partnership with communities.