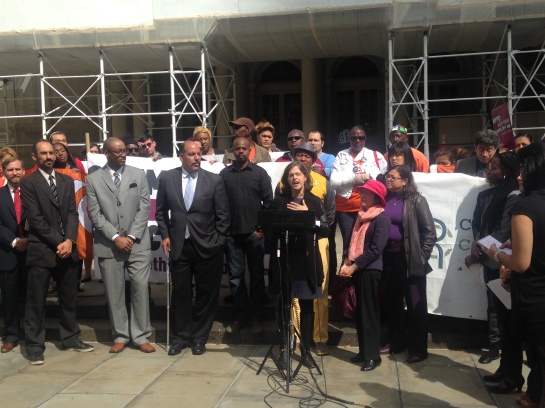 New York, NY – New York City elected officials joined Communities United for Police Reform (CPR) and a number of law enforcement and advocacy organizations to demand that NYPD unions stop using frivolous legal maneuvers to block the court-ordered reform process to stop-and-frisk and decouple the issue from their contract negotiations with the city. Police unions recently filed a new appeal with the U.S. Court of Appeals after being denied intervening status in the federal stop-and-frisk lawsuit by Federal Court Judge Analisa Torres.

“We must honor Judge Scheindlin’s landmark decision that unreasonable and discriminatory searches are unconstitutional,” said New York City Council Progressive Caucus Co-Chairs Antonio Reynoso and Donovan Richards. “Caucus members serve under the principle that partnership with communities and police accountability will lead to greater public safety therefore this obstructive appeal must be stopped. We look forward to starting the Joint Reform Process as this step, along with court ordered monitoring, will launch the collaboration necessary to right this institutional wrong.”

“The foundation for moving towards equality has got to be that the tools and the procedures police use to promote public safety be the same regardless of neighborhood,” said Progressive Caucus Vice-Chair Helen Rosenthal. “That is why it is critical this appeal by the NYPD Unions be abandoned and a community-driven conversation be allowed to move forward immediately because you can’t combat inequality when law enforcement is applied inequitably.” Full Release

NY Daily News: Stop and Frisk rally at City Hall – but this time against unions, not NYPD