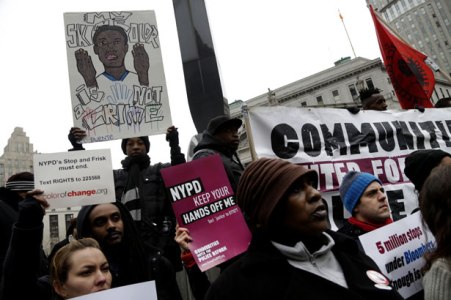 Charles B. Billups, Chairperson of the Grand Council of Guardians

WHY:             Under the previous Bloomberg administration, the use of stop-and-frisk increased by more than 600 percent. Nearly nine in ten of those stopped were neither arrested nor issued a summons, and nearly 90% of those stopped were Black or Latina/o. New Yorkers were stopped by the NYPD over half a million times in 2012 and over 5 million stops were made throughout the Bloomberg administration. The NYPD’s own data showed its exploding, discriminatory use of stop-and-frisk failed to make a notable impact on gun violence.

In August of 2013, a Federal court ruled that the Bloomberg administration’s stop-and-frisk policy was unconstitutional. The Bloomberg administration and police unions sought to appeal the ruling and delay the implementation of the court’s joint remedy process. The de Blasio administration reached an agreement with plaintiffs to drop the city’s appeal and move forward with the process, but police unions continue to seek legal maneuvers that delay the development and implementation of lasting reforms. After the lower court denied the unions’ motions to intervene in the case, they are once again going before the U.S. Court of Appeals for the 2nd Circuit, this time to request intervening status in the case. Their efforts only delay the beginning of a collaborative process uniting communities with law enforcement and other stakeholders in developing reforms and solutions to stop-and-frisk abuses that violated New Yorkers’ civil rights. That process is critical to ensuring there are lasting reforms, beyond the decrease in the number of stops conducted, to protect the fundamental civil rights of New Yorkers.