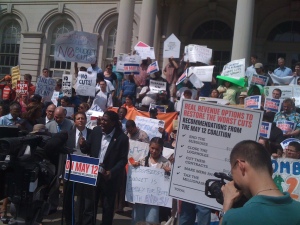 New York City needs real revenue options for the upcoming budget and we need them right now.  A “People’s Budget” plan was announced today by the Progressive Caucus of the New York City Council and a growing coalition that includes City Council Members, leaders from the City’s largest unions and social service advocacy groups. This plan would balance the budget and reduce proposed cuts by ending failed subsidies to the largest banks, reducing non-human services related city contracts, adopting recommendations by the City’s Independent Budget Office, and enacting a fairer tax code.

The Progressive Caucus – composed of City Council Members dedicated to creating a more just and equal New York City – has been advocating for revenue options instead of cuts to vital social services since its formation last year.

The “People’s Budget” plan has gained traction in the past week, with other Council Members endorsing it in increasing numbers – approaching the majority of votes needed to pass a budget – and key Council Committee Chairs taking action on some individual proposals.  The development comes as other efforts to balance the budget while reducing cuts to education and the social safety net have faltered.

Tuesday’s announcement is the near-culmination of a coordinated campaign to add sensible revenue options beginning with the May 12 coalition’s 20,000-person rally on Wall Street.  A copy of the coalition’s specific plans for sensible changes to the budget, and the Council Members’ letter to Mayor Bloomberg, is available on request.

“Everyone is approaching these budget negotiations with a spirit of  ‘shared sacrifice’ except for Mayor Bloomberg, who continues to act as though his job is protect those who can afford it most.  I’m proud to stand today with a coalition of groups all willing to do our part … but also demanding that the wealthiest individuals and institutions also do theirs.  We are headed for disastrous consequences if we don’t start looking at a better balance of cuts, controlling contract spending, and real revenue options right now.”   Brad Lander, co-chair of the Progressive Caucus and representative of the 39th Council District

“The cuts proposed by Mayor Bloomberg will devastate our city’s social safety net. Now more than ever, we need his leadership to look at the kinds of alternative cuts and revenue raisers proposed by the May 12th Coalition.” Melissa Mark-Viverito, co-chair of the Progressive Caucus and representative of the 8th Council District

“The “People’s Budget” is a fair budget, plain and simple. This budget proposal will keep our city safe and protect the needs of our children, seniors and less fortunate. I am glad to see that within the Council there is a growing level of urgency as the budget deadline fast approaches to prevent drastic and catastrophic cuts. While certain sacrifices need to be made, they should be made by everyone, especially by the banks and private contractors who have benefited from this city’s success, but have yet to step up in its time of need. What New York City needs right now is for Mayor Bloomberg to be the leader the people elected him to be, stand up to Wall Street and demand shared sacrifice in this budget.” Council Member Jumaane D. Williams, 45th Council District

“We have options, and cutting vital services is not one of them. Maintaining the safety net for vulnerable New Yorkers by generating revenues through the elimination of costly private consultants and withdrawing reserve funds can prevent layoffs and unnecessary pain.” Letitia James, 35th Council District

“This coalition has explored the alternatives and I am confident that there are ways to reduce the budget gap that do not include laying off teachers or ending social services for the neediest among us. This is a $66 billion budget. Not only have we identified ways to stave off drastic cuts to essential services, but we have identified ways to make money. I urge Mayor Bloomberg to ask big banks, hedge funds, and the top 1 percent of earners to start paying their fair share. I urge Mayor Bloomberg to stand on the side of the everyday people who are integral to this City’s success.” Margaret Chin, 1st Council District

“The toll that the Mayor’s proposed cuts are going to take on human, educational and other services that are vital to our most vulnerable communities is too much for the City to bear. We can avoid these devastating losses by enacting a fairer budget that includes a billion dollars in alternative revenue. The People’s Budget plan puts forth reasonable changes that will have a profound impact on the millions of New Yorkers facing an uncertain future. Allowing our City’s wealthiest people to continue to make record profits while our working class bears the brunt of this economic crisis is simply indefensible.” Daniel Dromm, 25th Council District